Everything is now set with the first Emergenza gig.

Klubben Fryshuset January 20th. There will be many good bands playing. 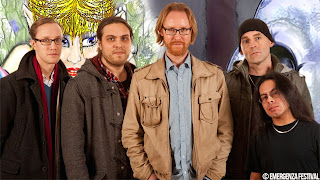 We have had two great rehearsals since last and we have decided to include Align and Nuclear War in the set. There will probably be a new tune included as well.

See you next year!

Take care and let the music flow!
Jesper
Posted by Reform at 8:01 AM

Hi there all reformed friends!

Because of various reasons we have been laying low for a while. The work with the new record was more exhausting than we thought it was. We have had a bit of what is called post performance depression, PPD. The record has been very well received, but the psychedelic jazz rock business is not a brisk one. Therefor it is important to have a new goal to aim for. We have decided that we will concentrate on new songs and the ones we like the best from the album. We will try to develop new interesting sounds and approaches to our music so we do not get stuck.

We had a rehearsal last Tuesday and we actually made two new tunes. Very satisfying and relieving! I feel we have strength now and I hope that in a not so distant future we will do a release concert for Reveries of Reform.

It was really nice playing the Live at Festival in Örebro. We have decided to play the Emergenza Festival here in Stockholm. From what I know this festival is mainly for new hungry rock bands that want to reach out. I talked to the festival board about our participation and they actually assured me that we would not be completely out of the festival frame. On Tuesday, before we rehearse, we will do a promo photo shoot! Great!

Here is a newly edited video from last time we played the South Side Pub. Janne Kullhammar had never played the tune, The Faithful, but made a great interpretation anyway. There was not enough video recorded so a sequence from the movie 2001 has been made to work as a substitute. Enjoy!

Over to reform related matters:

On Saturday October 29th me and my long time friend Lars-Johan Brännmarkinitiated the work with Ralph Lundsten's new music. It will a multi musical experience where musical worlds meet and collide. All based on, as it seems, three new pieces by Ralph. The working title is River of Time.

The Andromeda studio is really something special, something completely out of the ordinary. We located everything and Ralph taught us how he use to work. Very interesting! Although Lars-Johan is a great engineer all this took quite a while.

On the 3rd of December we returned to begin the recording session. Ralph had prepared everything with choosing his sounds and by SMPTE coding a tape plus having constructed a very complicated background consisting of "cosmic noise". After having synchronized the computer with the 32-channel tape recorder the recording happened accordingly:

1. The midi signals from the piece were transferred to Ralph synthesizer unit where he mixed sounds from different modules.

2. The midi with the new sounds were recorded onto the tape in order to get the analog warmth. This process was made for every midi channel.

3. The music, now on tape, was in turn transferred back as audio tracks to the computer.

A very interesting and unique process. Well tried out to gain the best musical result.

Hope everything turns out well!